Indonesia at the UN General Assembly: Vanuatu Do not Intervene in Papua Affairs — West Papua

Indonesia at the UN General Assembly: Vanuatu Do not Intervene in Papua Affairs — West Papua

West Papua Drama Queen Veronica Koman, a Chinese Indonesian who used to work helping West Papuan to fight for independence may have thousands scenarios to twist every story about West Papua. 17 more words

Erratic behaviour of Veronica Koman In one side, when a person like Veronika Koman Liau (VKL) has mental disorder, we may need to accept that her behaviour will be inconsistent. 19 more words

Dishonest twitter campaign is not something new. Political campaign using twitter platform is massive in every corner of the world. West Papua Blog calls for fact-checking of political campaign by both pro separatist Papua and pro Indonesia after observing so many fake news, disinformation, deceptive opinion, and misleading claims about what happened in… 400 more…

More and more armed West Papuan rebels have surrendered and declared their allegiance to the Unitary State of the Republic of Indonesia over the past few months of 2020. 863 more words

I don’t know who is Veronica Koman, but somehow I sense something fishy about her from news and social media. Luckily I found the following article from Red Fire 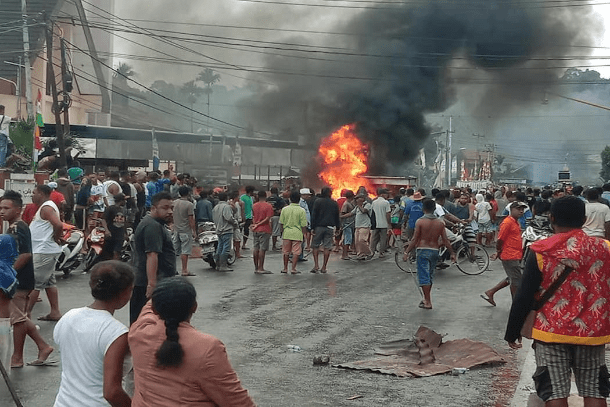 Veronica Koman: Human Rights Fraud 07-01-2020 – When leftists hear the term “human rights lawyer”, suspicions are, or should be, immediately raised. “Human rights”, so-called, has been twisted and distorted by the paid and unpaid scribes of Western imperialism into something which no longer corresponds to what these words originally meant in the English language. […]

The success of the United Nations in Papua — Free West Papua

Bernard J. Firestone: The success of the United Nations in Papua was extraordinary because, under the provisions of the New York Agreement and the subsequent General Assembly resolution, UNTEA was the first case of the Organization’s direct administration of a territory. Another notable feature of that exercise was that its funding was provided by the […]

In the wake of a deadly aircraft wreck in Papua, the government on Thursday ordered an examination of Merpati Nusantara Airlines’s remaining turboprop planes.

“We have issued letters ordering an inspection and safety audit on the 12 MA-60 airplanes,” Transportation Minister Freddy Numberi said at a news conference at the Presidential Office.

The announcement came after a cabinet meeting where President Susilo Bambang Yudhoyono ordered the inspections after the fatal crash of an MA-60 into waters off Kaimana, West Papua, on Saturday, which is believed to have killed all 25 on board. END_OF_DOCUMENT_TOKEN_TO_BE_REPLACED

Australia has announced it will provide an estimated Rp 5.15 trillion (US$602.55 million) in development assistance to Indonesia this year, an increase of more than $100 million compared to last year.

US Congress: Special Autonomy vs Independence

Hearings on the issue in Papua in the U.S. Congress which was held on September 22, 2010 was initiated by Eni FH Faleomavaega, chairman of the Subcommittee of the U.S. Congress. The hearing invited leaders of Papua as Octavianus Mote, Nicholas Messet, Henkie Rumbewas, Franzalbert Joku, some scholars such as Eben Kirksey, Pieter Drooglever and others and off course Benny Wenda was not considered as a Papuan leader due to the fact that he is only self-proclaimed leader.

They were invited to give such testimony and statements about the circumstances in Papua. These hearings grew into a new round of international discussions on the Papua issue because the U.S. Congress invited the leaders from both sides the pro-independence Papuan and the pro-special autonomy such as Nicholas Messet and Franzalbert Joku of the Independent Group Supporting the Special Autonomous Region of Papua Of Within The Republic Of Indonesia (IGSSARPRI). The U.S. Congress is doing much better approach than UK Parliament because they can get input of Papua from two sides, which will provide objective data supported by evidence that can be justified. END_OF_DOCUMENT_TOKEN_TO_BE_REPLACED

West Papua Independence keep killing people and destroying many facilities to show that they are exist.

How to deliver peace in troubled Papua province

A series of threats and violence in the mining area of PT Freeport Indonesia is unlikely to cease despite the death of the Free Papua Movement (OPM) leader Kelly Kwalik, who was believed to be behind the terror in Papua. END_OF_DOCUMENT_TOKEN_TO_BE_REPLACED

END_OF_DOCUMENT_TOKEN_TO_BE_REPLACED

Freeport has yet to help Papua: DPD

PT Freeport Indonesia has not helped develop human resources in Papua, particularly in the Amungme and Kamoro tribes, a member of the Regional Representatives’ Council (DPD) says. END_OF_DOCUMENT_TOKEN_TO_BE_REPLACED

The Indonesian embassy has opened its doors over the weekend [3-4 October] to West Papuans living in Port Moresby to reconfirm their intention to be repatriated to their homes in Indonesia’s Papua Province. END_OF_DOCUMENT_TOKEN_TO_BE_REPLACED

Recent bomb attacks linked to the legislative elections in
troubled Papua province may have been orchestrated by a single
group, police said Friday.

They said a forensic laboratory report showed that explosive
materials used in both bombings were the same. END_OF_DOCUMENT_TOKEN_TO_BE_REPLACED